In 2017 designer Brian Mac Farlane has taken to his mas camp his plight to advocate to the authorities the restoration of the country’s indigenous heritage and architecture. His presentation this year is called Cazabon: The Art of Living. It is his intention through the designs that he can call to action the “powers that be” to do something to preserve the wealth of the nation’s national heritage particularly the architecture from  the artist, Jean Michel Cazabon’s era ( late 1800’s and the early 1900’s). His expectations would materialize in the form of haute couture costumes displayed on persons owning roles from that era in a spectacle bound by a unanimous magnitude of architectural inspiration. This presentation would convene several artisans from costume to fashion designers. Brian Mac Farlane even took under his wing top graduates of The University of Trinidad and Tobago: Caribbean Academy for Fashion and Design. 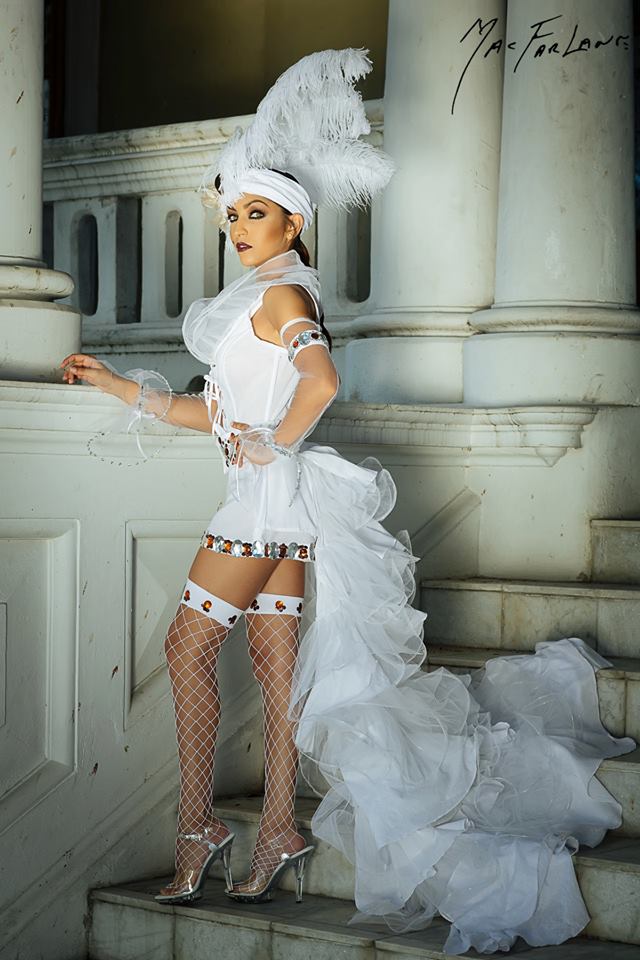 Cazabon’s paintings are colourful and resemble snapshots of the period the artist existed in and its immediate society. The people during that time wore colourful clothing because they were free to do so (post emancipation era). However, the designers took an all white disposition with several shades of white, hues of gold and brown. Since this is art one has to question the artist’s intention and the message he wants to communicate (which one will only know when one asks the creative director  because art is subject to multiple interpretation). I am under the impression that these characters are cast in white because they are souls of the people of that time.  Cazabon’s art featured stills of life paintings whilst Mac Farlane and his cohort of designers depict this time  capsule through creative costume design and movement of haute couture clothed masqueraders.

The regalia, glitz and glamour of Cazabon’s era via this band were launched at one of the Magnificent Seven buildings late last year. Again highlighting Brian’s  fixation with the conservation and restoration of architecture that served its prime during Cazabon’s time. In an interview Mac Farlane was noted for saying that his intention is to use unity to break silence and present splendor, beauty and revelry with a purpose via acknowledging profoundly rich heritage and culture. Designer icons and the local fashion industry’s rising stars occupy the band’s creative cast. Their names include Claudia Pegus, Peter Elias, Dale Angus, Dianne Hunt, Adrian Foster, Heather Jones, Dhisha Moorjani, Fazaad Mohammed, Charu Lochan Dass, Harvey Robertson, Kaleen Sanois and last but not least Brian Mac Farlane. 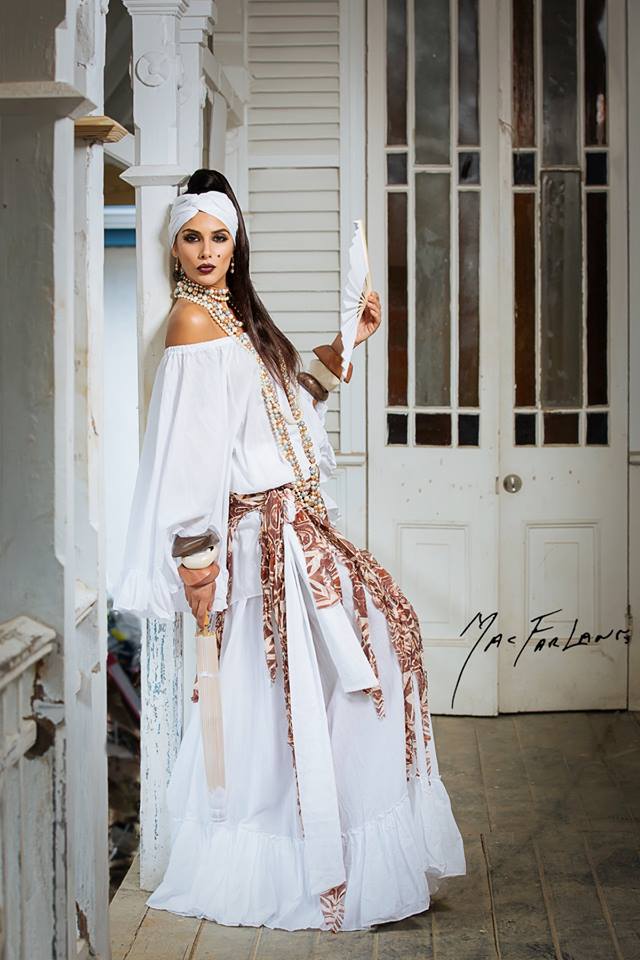 The White Hall Affair designed by Adrian Foster is already sold out. The White Hall was formerly owned by Joseph Leon Agostini. Following his death it was then occupied by Robert Henderson and his family. However an account of the interior design, architecture and atmosphere of social events at the White Hall from the author of “The Great Eight”, Mr. Anthony  De Verteuil seemed to inspire designer Adrian Foster. He took reference from this 19th century Edwardian era. He believes that the spirits of Henderson’s guests remained within the walls of the magnificent building. He believes they merged with the Corsican, Moorish architecture forming silhouettes from French style windows and fretwork trimmings to large coral stone pillars that support the structure. He believes their trapped souls continue to roam the hallways and main ballroom as their haunting presence continues to preserve the rich history of time. 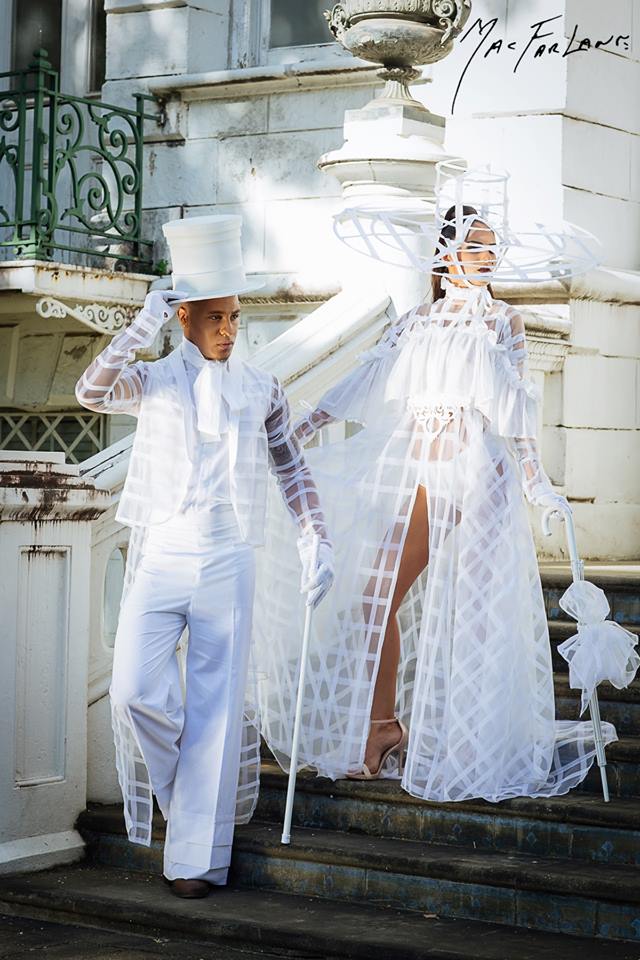 Apna Desh is designed by Dhisha Moorjani of House of Jaipur.  The costumes from Apna Desh- Our Land/Our Country reflect the conservative fashion and cultural design of traditional mas. These costumes feature a full collection of ethnic inspired Indian accessories detailed in silver. The female costumes come in several options. These include Sari or Gharara and top (skirt and top). The Apna Desh costumes are investment pieces as they can be worn again at a non Carnival occasion. Dhisha Moorjani (House of Jaipur) states, “It was Brian’s idea to use this theme and I followed the guidelines for colour scheme; beige and sepia tones. I used lots of cotton. In 1886 Cazabon’s painting of Indo Trinidadians was displayed at The Colonial Exhibit in London (renamed politically by Geofferey Maclean “The East Indian Group and The East Indian Women”). It depicted an Indo Trinidadian family; a mother, a father, a daughter. They are seen standing in their thatched roof house. The men are in their Kurta and Dhoti pants and the women in their flowing saris. The costumes for Cazabon The Art of Living feature options of Sari or Gharara which are sewn and easily arranged especially for anyone who never wore a sari. There are lots of silver pieces as accessories to reflect the heavy adornment of their bodies in jewelry. They did not trust banks during that time and converted their gold coins into jewelry.”

Citizens for Conservation is designed by Harvey Robertson. He affirms, “The conceptual stages of design and learning about the work of Citizens for Conservation inspired my design. The group is most known for its recent efforts to keep historical architecture alive. The demolition of the Greyfriars Church on Frederick Street in Port of Spain also inspired my designs. This church was built in the 1800’s during the Cazabon era. The materials for this costume consist of 100% cotton with shades of white and hues of brown.” Citizens For Conservation by Harvey Robertson 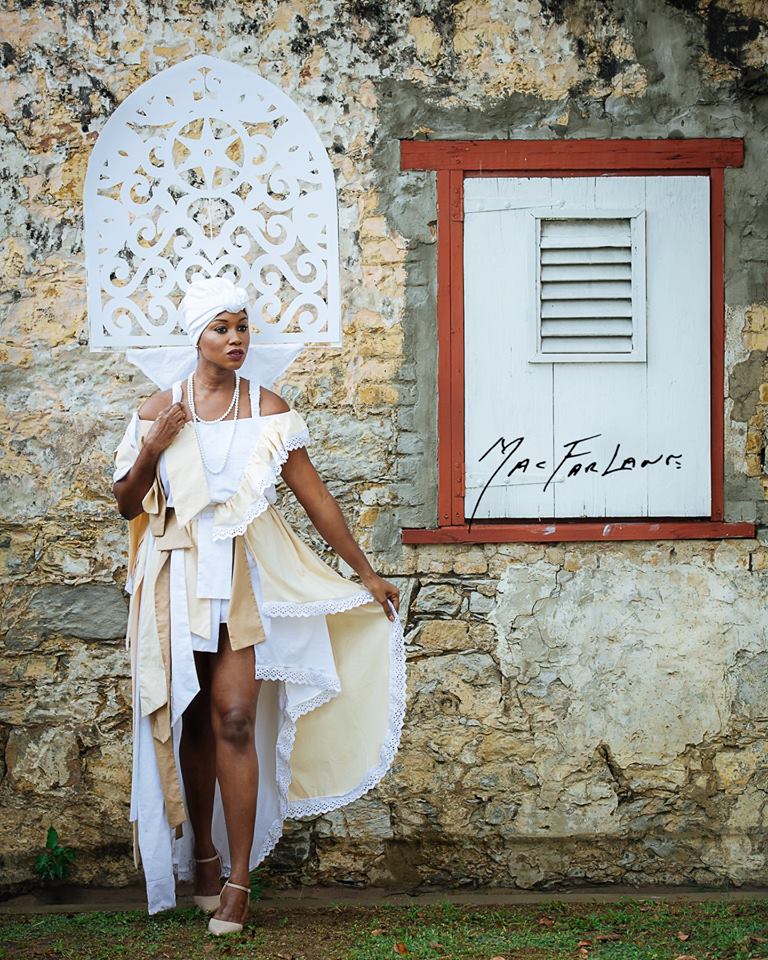 Citizens For Conservation by Harvery Robertson

Felicity is designed by Charu Lochan Dass for the brand CLD. In her words, “ Felicity is the bringing together a mix of pleasures and stylishness. It depicts both mid 1800’s fashion and the sobering yet intricate Victorian architecture. It exchanges historical extravagance for modern mobility, keeping the traditional trims; gloves and head scarves to bring to life an era so filled with presence and sophistication.” 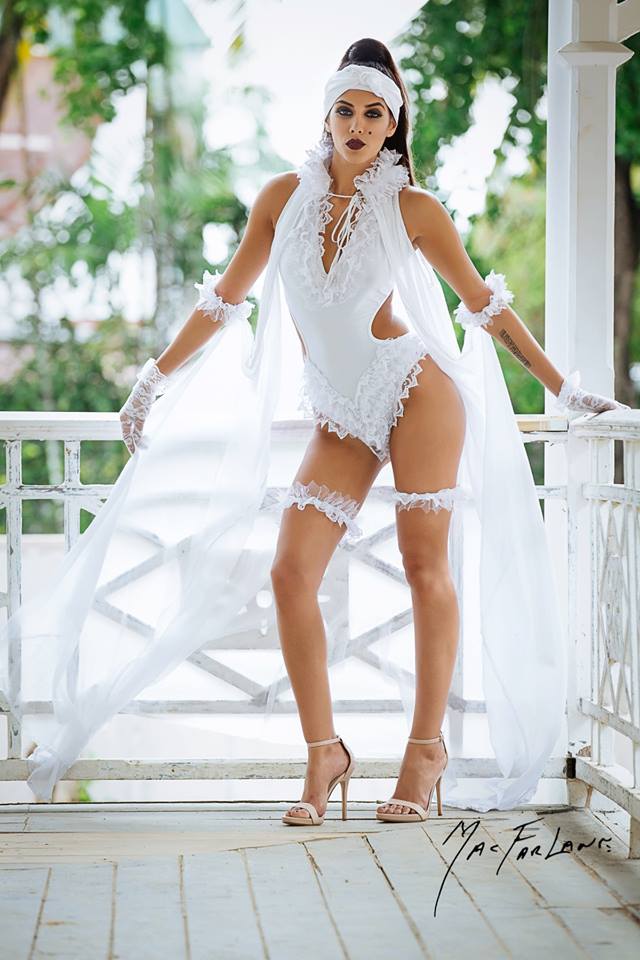 Gang Gang Sarah and Tom is designed by Dayle Angus from Tobago. This costume is detailed using lots of natural materials such as cowrie shells to represent the cotton from the silk cotton tree. The designer had a vision for a rugged, strong look for this costume. She collaborated with Dwayne Trim of  Mudern Mud in Tobago to include this neutral colour element in her design aesthetic. Designer Dale Angus says ” The whole idea around Cazabon is his representation of all aspects of society during that time period. It translates to what was happening in Tobago at that time, you would’ve seen a rise in the folklore. Gang Gang Sarah is a folklore  that originated between the late 1800’s – early 1900’s. When we talk about architecture of that time period and the use of nature, I approached him ( Brian Mac Farlane ) with Gang Gang Sarah. The main focus was the silk cotton tree. The tree stands today in Tobago and it is seen as a historical treasure. “ 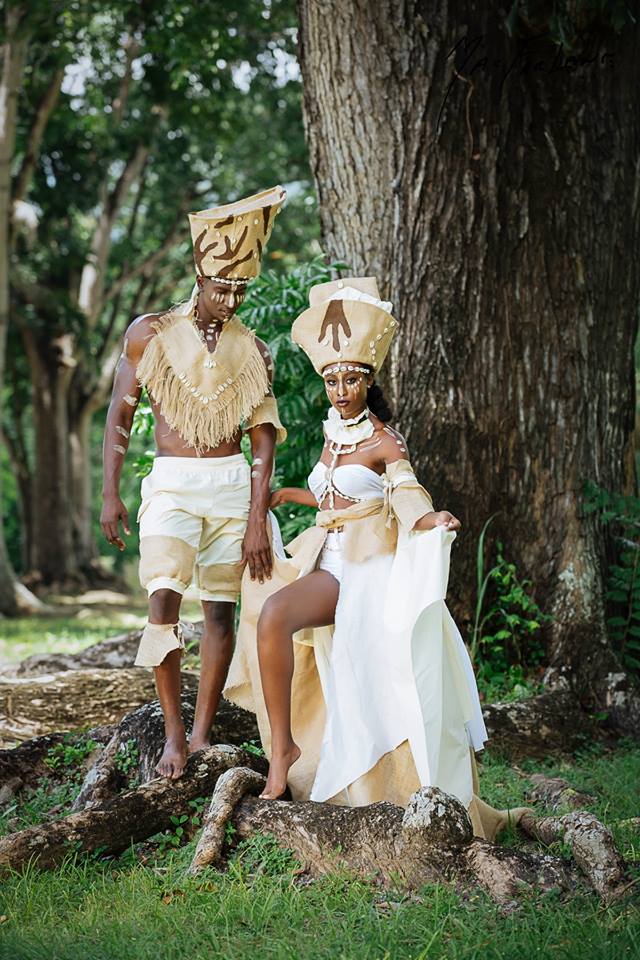 Messenger of Change is designed by Kaleen Sanois. The battymamzelle or dragonfly is used as the symbol for messenger of change. The base of the costume was inspired by this creature. The designer drew inspiration from common details of colonial houses seen in the lace work and the light weight cottons. Despite being a representation from the Cazabon era more flare was added to the look with gems, piping and gold accents. Designer Kaleen Sanois reiterates, ” The Messenger of Change is the mascot of the band. The message is that we need to come together as a people, to be united and to enjoy the country that is our own, and celebrate what we have left of our culture. Anybody can be The Messenger. I believe we’re all artists in some way and should use our art to promote positive change in any way. The Messenger of Change falls into the Cazabon era as a reminder that we are beautiful and unique people just like the battymamzelle.”

Messenger of Change by Kaleen Sanois

The Gatekeepers section is designed by Fazad Mohammed. In his words he describes the characters’ portrayal, “I am majestically unyielding and a grand sight to behold. My magnificence lives on through the traditions that now unfold. I stand guard at the treasure’s place centuries apart, defy me and to this day you shall know my wrath. We defy the ravages time and stand among the chosen few, we are the gatekeepers of the Estates and our presence beckons to you!” – Fazad Mohammed 2016.

He goes on to say that he was always  fascinated by the grand opulence of our heritage sites and their presence, which gives people a peek into a period in history that shaped their existence today. The Cazabon era set the tone for inspiring their creations for 2017 carnival and the design team saw it fit to present a collection that reflected the periods fashion and trends as well as stimulate discussion on the preservation of local heritage monuments. Through the portrayal of “The Gatekeepers” Fazad presents a look at the Grand iron and metal designs that adorn the magnificent structures. He also wanted to pay tribute to the men and women that contributed to its preservation. To this day he feels there is a sense of ethereal presence within these structures that stimulates one’s curiosity about life on the other side of the grand gates.

He believes that The Gatekeepers therefore, are those story tellers that brings to life this period in today’s modern world. Furthermore, he asserts that he would like to take the opportunity to celebrate the grand architectural magnificence and craftsmanship of the wrought iron artists. He feels that their creations adorn and protect our heritage estate houses and is a source of great inspiration to our current masterminds and architects. In this collection Fazad confirms that he maintained a strong connection with the actual fine fashionable fabrics of the period, ie cotton, silk, satin, lace and chiffon. He states that the accessories mirrored the opulence of the fine jewelry crafted from pearls, gold and other gems.  Fazad feels that the greatest significance is the wire work done by our local craftsmen to tell the story of the grand wrought iron artisans of the period.

If you would like to know more about the presentation of Cazabon: The Art of Living then please review the information below.

The Mac Farlane Carnival Mas Camp is one of the featured stops on my Trinidad Carnival Fashion Tour this Saturday 11th February 2017. If you would like to take the tour then please contact me at letsgotrinidadandtobago@gmail.com

The best advice we ever received from Darcel of @h

She is one of the most vivacious, creative and dow